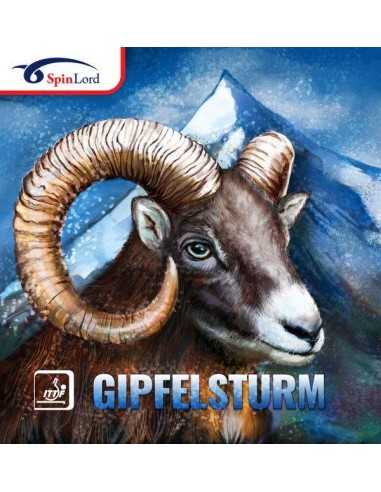 This product is no longer in stock

Gipfelsturm has a soft touch, although rubber and sponge actually are medium-hard.
Both top-sheet and sponge are very elastic. Unlike other short pimple-out rubbers, the pimples can even wobble a little bit, specially when playing block balls close to the table. The sponge can also provide a good built-in speed-gluing effect.

This rubber is very good for playing with spin, either flipping the ball over the table or playing a topspin. Block balls and counter attacks are very effective and comfortable to play with Gipfelsturm and can be played aggressive with high speed or rather passive. In any way Gipfelsturm is dangerous enough to force the opponent to make easy mistakes. Undercut balls and powerful shots are also possible, but for this Degu and Waran are better.

Gipfelsturm is not so easy to play as out other Short pimple-out rubbers (although the control is still higher then the control of most semi-long pimple-out rubbers), and the rubber is also a little bit heavier. But for experienced players looking for a combination of high speed, much spin and a good disruptive effect, this rubber will be the best choice.

Waran is even faster, but not so dangerous, Degu has even more spin, but is slower and also less dangerous, Keiler is also fast and dangerous, but not so good for playing with spin. So we hope this comparison helps you to understand what Gipfelsturm has been made for.

Please note that this rubber can´t be produced with a thicker sponge then 1,8 mm - on the other hand we think that for most players 1,8 mm will also be the best choice

No customer reviews for the moment.